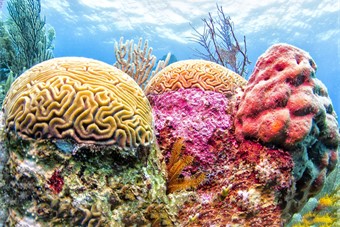 The Belize Barrier Reef is about 1000 km long and extends from southern Mexico to northern Honduras. It is the second largest barrier reef in the world after Australia’s. It is made up of numerous atolls and islands, some of which are tourist destinations such as Caye Caulker and Ambergris Caye. The barrier reef is also a popular destination for divers for its rich underwater fauna. One of the most emblematic places on the barrier is the famous Blue Hole, an underwater cenote of intense blue, 300m in diameter and 124m deep, discovered by Jean-Jacques Cousteau, which can be observed by plane or boat.