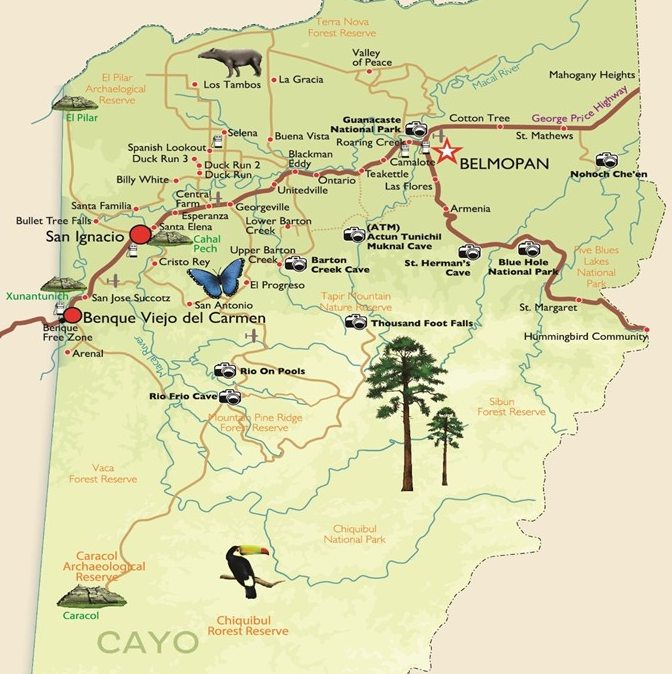 Cayo is the Western region in Belize, bordering Guatemala.

A great part of tourism sites in the country are located there.

You will find there clear and sinuous rivers and deafening waterfalls in the middle of a green jungle peppered with hills.

Numerous Mayan ruins are scattered there at the heart of an ecosystem that is unique in the world.

Xunantunich ou Stone Virgin is one of the most famous archaeological Mayan sites in Belize. Located at the top of ahill, its an ancient ceremonial center. It overlooks the Mopan River. Come and discover its temples and pyramids, among which El Castillo, which is 40 meters tall and the second high Mayan build in Belize, after the Caana temple in Caracol.

Bring your cameras, for the view at the top of the Castillo is simply breathtaking.

The ruins of Cahal Pech overlook San Ignacio and Santa Elena. The name of the site means “place of the ticks”. Cahal Pech was inhabited from 1200 BC to 800 AD. The first people to live there were part of the local aristocracy and built monuments reflecting incredible wealth and mixing Mayan and Olmec styles.

Come discover with us this site frozen in time.

The treasure of Belize.
This site was a prosperous and powerful city that ruled over the whole region during the classical Mayan period (800-900 AD) It was greater and more powerful than Tikal, its neighbor in Guatemala. Lost in the middle of the jungle, the track was drawn in the middle of the primary forest. You will cross rivers and pine hills and then plunge in the heart of the canopy (the jaguar and puma’s den). Adventure with a big A.

Located in the high lands of the South-West of Belize, it’s a virgin land you can go discover for a day to pretend you are Indiana Jones : Mountain Pine Ridge reserve.

In the middle of a captivating nature, you will enjoy the numerous waterfalls, rivers and caves…

–Big Rock Falls, one of the most beautiful waterfalls in the reserve A magnificent spectacle, with the possibility to go swimming !

–Rio on pools, a series of natural pools in the middle of a postcard-worthy landscape.

– Rio Frio Cave, going on a trip to discover the underground Mayan world.

The Guanacaste national park (GNP) is a protected area located in the center of the country.  Declared national park in 1990, its small size means you will quickly be immersed in its fauna and flora. Because it is close to the main cities in Belize, it’s an ideal destination for a one-day excursion.

The biggest park in Belize surrounds the archaeological site of Caracol and offers a great diversity in wildlife, among which you can find jaguars, ocelots, spider monkeys and armadillos.

Nohoch Che’en is located between Belize City and Belmopan. It’s a park renowned for its archaeological remnants and its cave network.

It is surrounded by a lush canopy.

Located along the hummingbird road, St. Herman’s Blue Hole national park is home to more than 200 bird species and howler monkeys. Let yourself be surprised by the latter’s cries.

At the heart of the tropical forest, go through the door to the Mayan underworld, enter hidden room, discover old Mayan artifacts, human skeletons… After a 45 min drive from San Ignacio and a 40 min walk in the jungle (interspersed with multiple crossing of rivers), you’ll arrive at the entrance of the cave Equipped with helmets and headlamps, you will have to swim and climb to feel all the beauty of Xibalba (Hell’s entrance for the Mayas)

During the trip to the Barton Creek cave, you will drive through a traditional Mennonite village, Upper Barton Creek. Then, on board a pirogue or a kayak (whichever you prefer), you will discover the cave. It was used by Mayan priests for ceremonies. Mayan artifacts are still being discovered there and adventure is never far away.

It is possible to swim there.

Experience the thrills of tubing in the refreshing waters of a natural pool. Float downstream, relax on a buoy, let yourself be carried by the current and enjoy the omnipresent nature.

Belmopan is the capital of Belize, one of the smallest capitals in the world.

Built in the 1960s, it has a modern aspect to it and is slowly asserting itself as the economical center of the country.

Located at the border between Belize and Guatemala, this small town established in 1800 close to the Macal river is enchanting with plenty of colorful and typical houses.

Come discover with us the surrounding nature full of animals, as well as the numerous Mayan sites.

This city is located at the border with Guatemala.

The city was founded in the 19th century, mainly by Guatemalan immigrants.